Designing For Voice: The Power of Prototyping

We’ve long used language to communicate with machines. Back in the early days of computing, engineers laboriously and meticulously mapped their ideas to ones and zeros by poking holes into punch cards — slowly and carefully spelling out commands, using the earliest of machine languages. While this wasn’t the friendliest “language,” it was, in fact, a language by textbook definition. We spoke the language of the machines.

Over time, computer scientists developed artificial languages that made it easier for humans to translate human thought into machine language. While not exactly English, some artificial languages come pretty close. Take a look at this example from the Structured Query Language (SQL), a programming language used by administrators for managing data in a database:

You don’t need to be a programmer to generally understand what’s happening there. Similarly, how about this AppleScript example, a language used by Mac OS developers to automate tasks on the desktop:

Making the Case for Voice

It sometimes surprises me that we need to “make the case for voice” given that humans have been moving in this direction from the moment they first started “speaking” to machines.

In a nutshell, voice makes sense because it’s:

Why now? Because it’s only recently that we’re seeing advances in technology, availability of hardware and software ecosystems, and growing consumer demand; it’s truly creating a moment that looks very much like a perfect storm — we’re finally at a place in time where voice and conversational applications are a reality.

Designing for Voice is Difficult

Amazing! Machines are finally starting to understand humans — it’s all 🦄 and 🌈 now, right?

Alas, no. Creating voice and natural language user experiences isn’t easy. In fact, the hardest part of the process isn’t the development — it’s designing the user experience. This surprised me – so I decided to look at the data.

Turns out while almost half of Amazon Echo and Google Home owners use their smart speaker devices "regularly" or "all of the time" — the chances that these same individuals are using installed skills is bleak. The average retention rate for an Alexa skill after one week is around 6%. A vast majority of published skills are "zombie apps" that are used only once then discarded. [6]

What’s the problem here? Why are so many people actively using their smart speakers, but quickly abandoning skills after installing them? Simply put, the high abandonment rate is driven by consumers with high expectations but are quick to abandon if the app is difficult to use.

Given the collective lack of industry experience required to develop great conversational applications, it’s fair to say most skills fall into the category of “difficult to use.” Jason Amunwa summed it up best: “Voice UX represents the biggest challenge since the birth of the smartphone.” [7]

From my own experience, I’ve seen the many challenges that Voice UX designers face. These fall into four broad categories:

While web and mobile design have established best practices and standards, conversational voice design is new, and its design standards are still being developed. Fortunately, a number of great resources are starting to emerge to help everyone learn best practices regarding process, tips and tools.

Tips - Voice UX designer Ben Sauer also maintains a blog called Voice Principles that includes a very useful “list of lists” outlining many guiding principles and tips from Amazon, Google, Microsoft, IBM, and others. Head over to that site for a great compendium of voice UX design wisdom.

Tools - From a tooling perspective, Orbita recently added a powerful feature called Orbita Prototype. It addresses the main challenges experienced by Voice UX designers in the four areas described above regarding creation, testing, measurement, and iteration.

Orbita Prototype is a powerful engine that enables rapid prototyping of conversational dialogues without requiring any coding - much like creating a wireframe for a web site or a sketch for a mobile app. Consider the following image, for example. 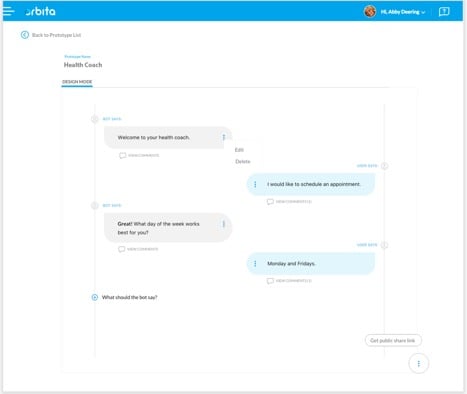 With Orbita Prototype, a UX designer can quickly create a conversational dialogue and make it available through a publicly accessible URL. The UX designer can readily share a “rough draft” of the experience. 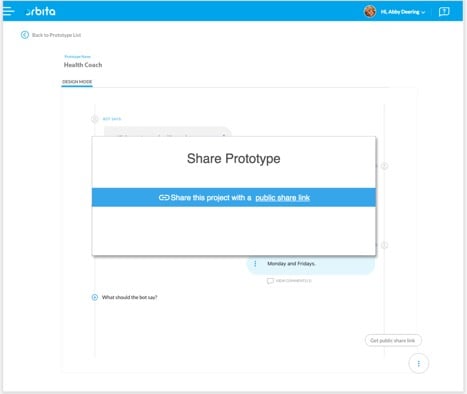 Additionally, Orbita Prototype provides functionality for testers, potential end users, and key stakeholders to “trial” an experience and provide feedback. This helps designers identify areas of friction areas within the UX, and also align priorities for future revisions and iterations. 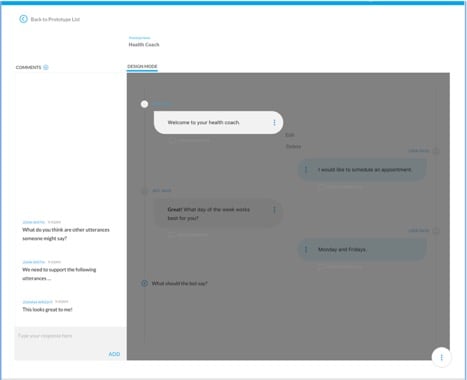 In the absence of prototyping, product owners cannot actively participate in the dialogue creation process. At best, they review written scripts. Typically, little or no feedback is provided until the dialogue is heard or seen, which is most often during or after the development process.

Without a tool like Orbita prototype product, product owners may be challenged to test assumptions with end users. “What will a user say in response to a prompt?,” for example. “Will the bot’s response make sense?” or “Is the dialog too long?” Additionally, product owners have now ability to identify potentially problematic areas, nor do they have access to quantifiable data points to inform decision making.

Orbita Prototype is a powerful engine for iterating on a project in near real-time. It enables product owners to quickly make adjustments to conversational dialogues, test adjustments, and measure the impact of these changes. Precious time is saved.

A positive end-user experience is fundamental to any successful project. Whether the desired outcome of a voice project is to improve staff productivity, increase customer/patient satisfaction, and/or decrease costs, Orbita Prototype improves a developer’s ability to create positive, engaging, and effective end-user experiences in a highly efficient way.

When it comes to designing, developing and maintaining conversational experiences, there can be...
Read More

This article originally appeared on the HLTH website. I am headed to the annual HLTH conference in...
Read More